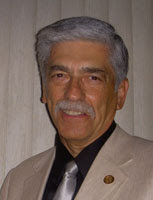 A.J. (Tony) Coco has served the Tustin Community for many years
in numerous capacities. We are proud to name him as a TAHS VIP

- Upon discharge, bought first (and last) motorcycle, took off same day from Norfolk to Tucson, traded for Ford in Dallas for remainder of trip across desert.

- Elected Tustin City Councilman, then Mayor (eight years). Conceived idea for putting message on reverse of all “Welcome to Tustin Signs” : “Work where you must, but live in Tustin”. At suggestion of Frank Greinke, then Chamber President, added “…live and shop…”

- Currently have 7 grandchildren
- Currently volunteer as reader/director for Recording for the Blind and Dyslexic (RBD)
- Currently taking bagpipe and Hebrew lessons, traveling and kayaking, not simultaneously.
- Practice Tai Chi Quan and do weekly NY Times Crossword just to keep mind and body active. 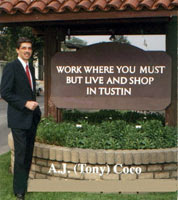 “Work where you must, but live and shop in Tustin”.